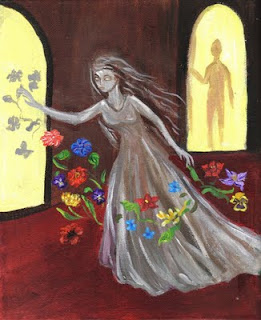 Other than knowing I wanted to paint a ghost flitting through a hallway I wasn't sure what I wanted to do with this painting, but when it was almost done I imagined flowers streaming by her and now I can't imagine it any other way. I am really very happy with this -- although I've been inspired by gothic and ghost story type literature of the 19th and 18th century recently, this doesn't point to any one particular story -- it's just a general ghostly image inspired by writers like J. Sheridan Le Fanu, Wilkie Collins, E.F. Benson, M.R. James and other wonderful writers.

Right now incidentally I am reading a book on my nook from the 18th century, which was one of my 600 or so public domain works I've downloaded from manybooks.net, archive.org or gutenberg.org, and this one is called The Haunted Priory by Stephen Cullen. It is also available as new, reprinted book from Zittaw Press. Despite the fact that the letter "s" is rendered as an "f" throughout the text, it is a very enjoyable read, and I will buy the reprint just as soon as I have some money, to add to my teetering pile of gothic novels.

Most of these books were originally published in 2, 3 or 4 volumes, so the versions that are made available through archives are usually incomplete. Only a few seem to be up in complete form for free -- The Mysterious Freebooter by Francis Lathom, The Haunted Palace by Mrs. Yorke, for instance -- though those are also available reprinted in shiny new wonderful copies from Zittaw and Valancourt Books.

Some other good places to find old horror by the way are Munseys and Horrormasters. I also like a lot of other pulp fiction from pre-1920s that they have on sites like Munseys and Manybooks.

I recently got a couple of books from Amazon thanks to the miracle of credit card reward point -- The Necromancer by George W.M. Reynolds, and Bungay Castle by Elizabeth Bonhote -- so my library mania continues, despite not having any money or space to put anything!

And finally, why does auto-save never work on Blogger? This is seriously beginning to make me crazy.
Posted by artbysarada at 12:31 PM No comments:

The Moonstone, and Dreams 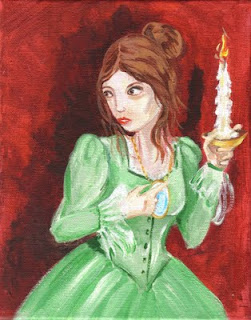 "The Moonstone (I)" (2011) by Sarada
As usual my pledge to post more often falls by the wayside. I was posting recently about some sewing creations, and before that some of my lace knitting, and all of that is still sitting around waiting to be photographed or blogged about but in the meantime I was sitting outside last week reading "The Rose and the Key" by J. Sheridan le Fanu and I became possessed of the desire to paint some imagery from the novels that I love.

I read mostly 1790s-1920s, i.e. gothic novels, Victorian ghost stories, sci-fi and supernatural fiction, and just literature in general from that time period. Wilkie Collins is one of my favorites, and this summer I read "The Woman in White", as I read "The Moonstone" last year.

The above painting is the first Moonstone-inspired piece -- not any particular scene in the book really, just an impression in general I have of the idea of someone feeling like she is pursued for her mysterious amulet... 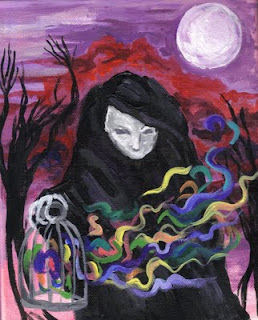 "The Spectrum of Dreams" (2011) by Sarada
I didn't think long and hard about a title for this one and I'm afraid it sounds a bit like a '90s Rush album as far as the title goes, but I wanted to express the idea of colors, and of a dreamlike atmosphere, so....now that I think about it, it reminds me more of the title of a 1960s or early speculative fiction book that I'd buy for the cover. At any rate, any excuse to unite dark horror and a bit of psychedelicness is fine by me!
Posted by artbysarada at 8:52 PM No comments: