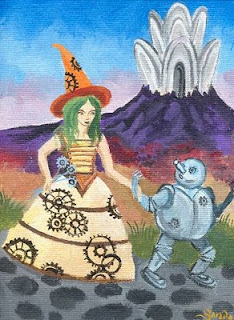 I had prints made of a few more paintings I did over the past couple of years -- including this one above, "Clockwork Witch." With a tiny dash of Tik-Tok from the Oz books, and a few clockwork gears scattered throughout to give it an industrial fairytale feel, I was thinking about this image recently and wanted to share it. Although it doesn't have any obvious Halloween elements, I remember painting it a couple days before Halloween while watching a marathon of one of those shows about the world's most haunted places.

I'm not quite sure how my train of thought brought me to this place but I have thinking about 19th century automata and steam-powered creations lately -- independently of the whole interest that has arisen around the concept of 'steampunk' these past few years/decades. Early science fiction, adventure novels and speculative fiction that project future technology are an interest for me, particularly the stranger bits, like the mid-1800s stories of "The Steam Man of the Prairies". (see below) That image, along with Tik Tok, inspired my little robot guy above. 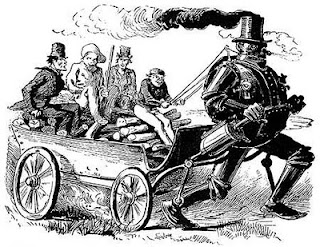 One of my personal favorite tales of the automata variety is Villier de l'Isle-Adam's "L'Eve Future" (The Future Eve) (1886) which posits a world in which Thomas Edison creates a bejeweled female android, who develops emotions and sentience -- but I won't give away anything else, it's quite a beautifully written story and now fairly easily accessible in an English translation. I read the version in "The Decadent Reader" but there's a translation under the title "Tomorrow's Eve" as well. (I receive no benefit whatsoever from linking to Amazon, by all means seek out copies wherever you choose, etexts are likely available as well! But yes that's my review from 2001 on the Decadent Reader page, ha!)

This also brings to mind the apocryphal tale of 17th century philosopher Rene Descartes, whom legend would have you believe created a clockwork girl to replace his daughter who died at the age of 5 of scarlet fever (or so various internet sources tell me). This site has some interesting quoted passages on the legend -- basically, the unlikely story goes, that he created a mechanical doll in her image which traveled everywhere with him -- and which was ultimately thrown overboard by a sea captain horrified by the strange robot. A book that I have not read but which sounds interesting, "Edison's Eve: A Magical History of the Quest for Mechanical Life" by Gaby Wood, includes a long sample passage about that very legend. Funny how I got through a minor in Philosophy in school without ever coming across that most interesting little bit of fancy!

Since my literary interests are mostly gathered in the pre-1930s era (with a few exceptions being made for 1960s and 70s speculative fiction and a few other odds and ends) I'll also mention a familiar name, Jules Verne, for his "Steam House" novel (1880) which I was drawn to for its steam-powered mechanical elephant as a mode of transportation. How about that, huh?

Posted by artbysarada at 5:02 PM 2 comments:

I pose this question of friends once a year but I have yet to really get going on the project so I'll ask again! What paintings from my web site, http://www.artbysarada.com, that I did in the earlier part of the decade, do you think would make nice prints or might otherwise be reproducible (on a mug, a tote, whatever!)?

You can see what I already have along those lines in the Cafepress store if you go to my page for that here:

I really like the Cafepress stuff but I'd like to ultimately be able to offer that kind of thing directly, rather than going through an outside site.

The painting you see above, "Halloween Cauldron," I still have an original of and I can make prints of that on demand -- same with this one below, "The Crone's Secret."

However, you see, the problem with me making prints of older work is that I do not have high definition scans of the paintings that I did back in 2000-2003, so once I sold the originals I couldn't really reproduce them. I can however paint new versions of these favorite images. Here are two I am working on right now:

"Alice in the Dark Woods"

So I'm just gauging interest in what some of my older images might be good to resurrect for the purposes of creating prints from new copies of them now that the technology is available. I can't do all of them but it's something that will keep me busy for awhile if it works out!


Posted by artbysarada at 11:33 PM No comments: 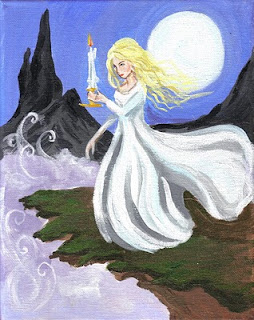 The second of my imaginary gothic romance/mystery novel covers is "Terror on the Cliff." Paintings with a lot of white in them are hard to scan...I may photograph her in daylight to show the colours a bit more vividly. Yes, I managed to use the words "wuthering" and "heights" in the Etsy description, but this also means that the Kate Bush song will go through my head now for another week! I have actually had a craving to read Jane Eyre lately, to be honest, and despite my English literature degree, I have not read Wuthering Heights, but I plan to soon.
Posted by artbysarada at 9:35 PM No comments: 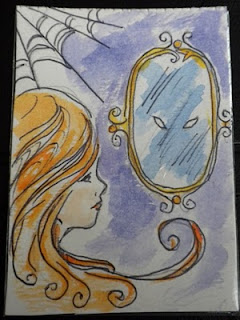 In the summer of 2008 I asked the question...what on earth is an ACEO? Well, they are small and fast and fun to do and people seem to like them so I did a few, but the challenges of scanning something tiny (about 2 x 3 inches give or take) and then having to upload a picture that is about 1000 pixels on a side, means that the images get kind of distorted. Now that I have a camera with a semi-reliable macro function I can take pictures of the darn things so they look like something. So I have relisted a few on Etsy (click for the links) and I will list a few more. Will I do more though?....well that depends if I can find the little plastic baseball card sized sheaths that are needed to protect them. Where DID I put those?....the perils of moving.... 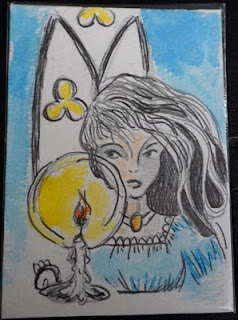 At any rate, these continue my themes of gothic horror and there are also some ghosts in bottles and a cryptid....UFOs are coming though, once I get those pictures taken....I mean of the ACEOs, not of the actual UFOs, unless tonight turns out to be more interesting of an evening than I had planned! 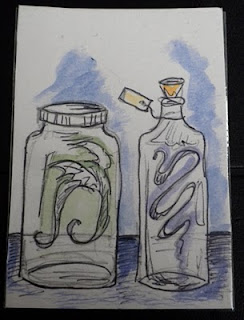 Posted by artbysarada at 3:38 PM No comments:

Return of the scanner 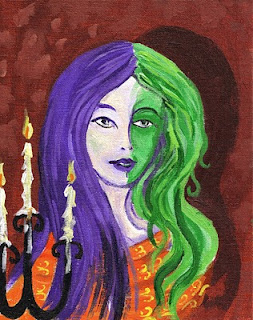 While I don't have my usual scanner hooked up, I was able for the first time in over three months to scan and upload some stuff right to the in-ter-net like a real actual person in the 21st century! We can thank an unnamed cable company for the fact that I did not have internet for two months even though I was still paying for it, by the way.

As part of my obsession with 1960s psychedelic takes on horror, here is a painting that I did with that in mind. She becomes a bit of a lizard-woman in the shadows. She is on Etsy now and so is the painting that I did in my previous post ... she is over here.

Other than just hawking my wares though I will say that my inspiration recently has been not only my autumnal return to watching Dark Shadows, and an interest in book covers that I might or might not read...but here is some of what I HAVE been reading in the past month:

those latter two I haven't finished yet since they are collections and rather long, I am working my way through them while i read these shorter works. I plan to concentrate on ghost stories for the fall of course!
Posted by artbysarada at 8:50 PM No comments:

Back from the darkness 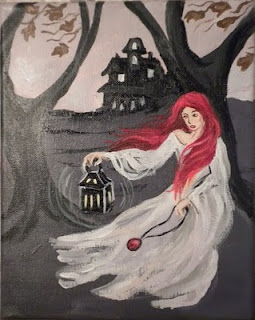 It's been over two months since I was able to update this blog so thank you to anyone who still has me on their list! I have not had internet access regularly since early June, except when I was at work (and I quit my job on July 23 to Pursue Other Interests, so I haven't had it there in awhile) or at my mom's house. I have not had my scanner hooked up to anything, since I was in the process of moving for a very long time -- and while I've been doing new art and keeping up with Etsy sales, etc., I haven't been able to update online otherwise. Updates might be a little spotty for awhile still but since the fall season is under way I'd better get cracking with something!

I'm working on some gothic paintings -- gothic in the sense of "women wearing gowns holding candelabras," like the mystery/romance novel covers from the 60s and 70s, or gothic in the original literary sense of the 1790s (Ann Radcliffe & c.). But while I prefer to read the 1790s literature, the artwork of the 1960s novels has captured me -- possibly because of my love of the show "Dark Shadows" -- and I am going to have a lot of flowing white gowns, Victorian mansions and amulets for awhile. Here is the first in this particular series! I will post her on Etsy when I can get a proper scan, this is just a photograph for now. Happy fall! I should also note that while last fall I had tons of photos of the woods and mushrooms, that the incredible lack of rain this summer has made for no mushrooms, and not a lot of greenery -- and the intense heat and the fact that I was moving all of my belongings out of my apartment, meant that I did not take a lot of recreational walks. All of that will change soon though!
Posted by artbysarada at 10:31 PM 2 comments: