Dragons, and some dungeons 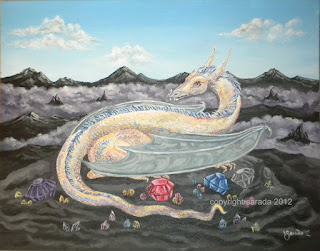 Dragons were kind of where everything started when I began painting in 1986 just before I turned 13. Although they weren't the absolute first thing I ever painted, they were definitely one of the main subjects along with unicorns and would-be D&D characters. Well, after about four years of that, by the end of high school my interest in surrealism and color and more abstract art took over for a long time and I mainly painted surreal alien landscapes.  But one thing I really miss from being 16 or so was the way that I used to do relatively large paintings, and patiently work on them for a long time, getting lots of details in as I figured out exactly how I wanted to paint.  After having a dream last night about a bunch of large-ish paintings that my dream-self forgot that I did, I thought I'd get a few larger canvases and revisit that old style.

"Opal Dragon's Eyrie" is my first dragon painting in many years, though not too big, at 14 x 18 inches. It's too big for a regular scanner so I had to take a photo (above) and a series of scans (example below) but I'm very happy that I was able to snap back to 1989 and indulge in my old subject matter, with a little less clumsiness of brushstroke. I still don't technically know what I'm doing, but I'm glad that I'm still 16 at heart somewhere. 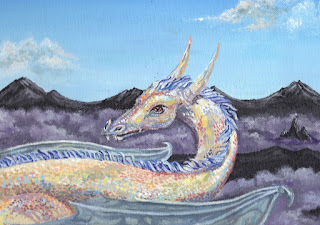 My mom has been kind enough to take some photos of paintings that I still have around her house, so here are a couple from 1989, which I consider my "peak" year for doing 16 x 20 fantasy paintings with intense detail. I don't know that I really named paintings back then (I barely do now...) but I am really terribly fond of this one of cave adventurers. There's something very satisfying about working on the details of a big pile of treasure, or on a dragon's scales.  These were inspired by my childhood loved of first edition D&D (or AD&D) which I almost never played with other people but certainly collected a lot of books and accessories. Poring over them and creating characters and storylines was very satisfying even without actually playing the game. 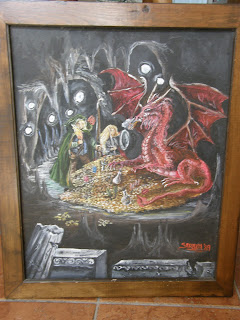 Here is another dragon that I have a soft spot for! I was very happy with the way I did the crystals, at the time. This might have been 1990 or still 1989.  These frames were all made by my late grandfather...I wish I had learned to make them myself too, it would be incredibly handy! I did do a little woodworking as a young thing, but nothing practical, I'm afraid. 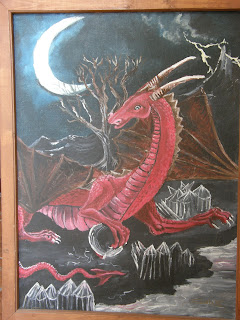 Below is a golden dragon in a snowy landscape that I am also very attached to. I would like to have the patience to do a forest like this again! 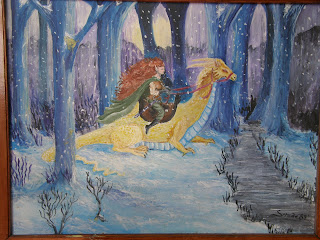 Finally, for laughs, here is a much earlier attempt when I was trying to work out exactly how to use a paintbrush.  I think that I came a long way from those early attempts to the ones you see above from around 1989. 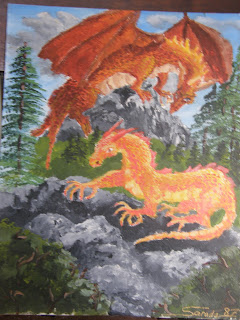 More nostalgia on the way, I have dozens more paintings to share - including some that are no longer in my collection...alas, I should have just held onto them all, I'll never be 14 again!