Psychedelic prints and their inspiration 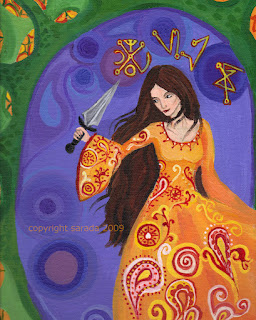 Several years ago i did a number of paintings for my own enjoyment, with very colorful, psychedelic themes, inspired (as usual) by thoughts of psychedelic horror movies, strange early 70s conspiracy/occult books, album covers, and other things that I find visually interesting.

But I was so attached to them that I kept them, even though I wanted to share these with like-minded folks who like the same sort of things. It finally occurred to me though, that I could offer them as prints -- 8 x 10, since they were at least that large themselves, but I've finally started on this project.

The above painting, "Paisley Priestess" is probably an idealized image of how I see myself! She has long hair, a bright orange paisley dress, and is amidst a background of secondary colors (green, purple, and her own orange) swirling with strange globules and snake or tentacle-textured webbing. I threw in a few magic sigils which represent the planet Venus. The planetary symbols are a nod to the alchemical surrealism of the film "The Holy Mountain" though the idea of a psychedelic knife-wielding woman probably comes a bit more from the cheesy movie "Mantis in Lace." 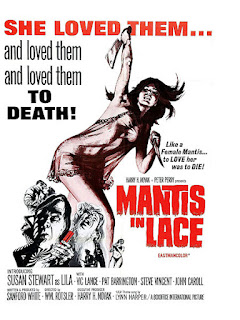 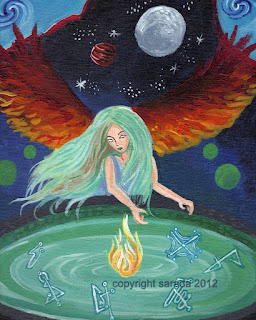 "Keeper of the Moon Pool" is inspired by the same sources, with moon sigils this time, and a fire-winged, star-eyed goddess swirling her divination pool in deep outer space. I was thinking in particular of a book called "The Moon Pool" (A. Merritt) for the title of this, though the imagery is just a subconscious meandering on my part. I hadn't seen this particular cover (below) for that book when I painted this but there are a few thematic similarities. Psychedelic outer space horror, though, is something that I could pretty much swim around in on a full-time, permanent basis. 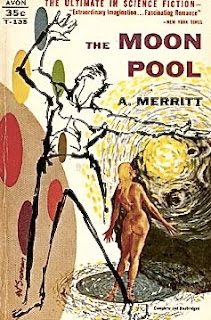 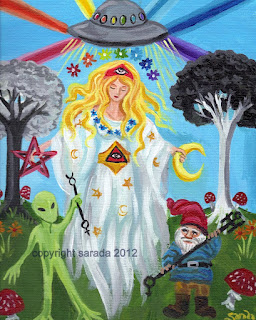 "Earth Welcomes You" is a painting that I previously sold, but I was inspired by thoughts of UFO/Conspiracy books like the ones published by Adventures Unlimited Press, and the strange "educational" films of the Unarius Academy of Science such as this one. My goal was just to create a colorful image that captured a collection of unrelated occult, New Age religion, UFO and hippie ideas, in such a way that it might actually accurately represent someone's theory, somewhere, of mysterious doings being afoot. There are some Tarot and Qabalistic references, a UFO alien obviously, some mysterious little people (a gnome), and various astrological and Masonic references. I'm sure it all ties together somehow. I also had thoughts of one of my favorite hippie cult bands, Ya Ho Wha 13, while I was painting this -- i think I was listening to them while I did, actually. One of the things that all of these different worlds have in common though are the use of striking images -- eyes, pyramids, wings, alchemical or astrological symbols, and lots and lots of color. 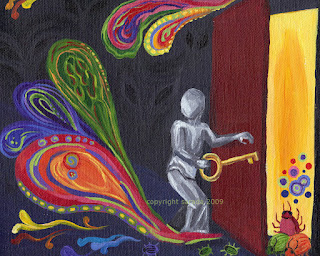 I also have several dream images that I've kept in my personal collection that are meant simply to be exercises in color and creativity. This piece, "The Key to Dreams," is just a visual representation of inspiration -- that feeling that you've unlocked a whole realm of things that are going to overwhelm and excite you. the main figure is blank and featureless, open to possibility. I did quite a lot of paintings with a "blank" character that represents both the artist and the viewer, who are just along for the ride in a colorful or alien landscape. 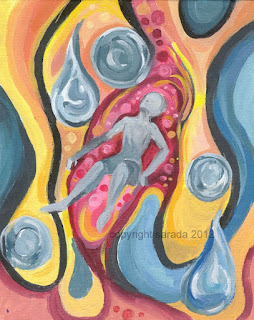 This painting I've always just referred to, psychedelically enough, as "Trip Lord" in my own notes, but I gave it a proper title now that it's available as a print, "Adrift in the Primary Sea." I was thinking of someone sitting back and listening to, oh, I don't know, let's say Hawkwind, and feeling carried away by groovy sounds. 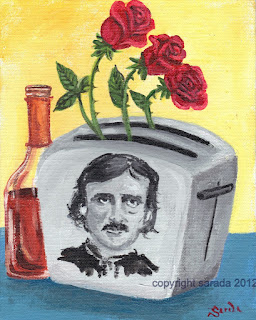 Finally as a postscript, I have made prints of my "Poe Toaster" painting that I blogged about previously, slightly adjusted for aspect ratio in a print form.

I have a few more paintings from my personal collection or which I have previously sold, that I'm going to add to my print offerings in time, but it's just nice to be able to share them and tell the story of how they came to be.
Posted by artbysarada at 2:14 PM No comments:

I can't promise a cohesive theme, but I thought I would collect three of my most recent paintings here with a little bit of explanation, since they come from very different places. 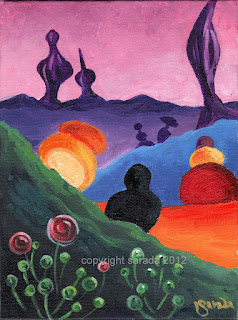 "Sunset in the Valley of Shapes" is a little something I painted the other night with perhaps too vague a title, because when I painted this I was thinking of an alien planet populated by the strange and colorful remains of oddly biomorphic monuments.

Maybe it is robot gravemarkers on a psychedelic future landscape. I just knew that I wanted every color to be represented, and I like the idea of these inhuman forms poised among rolling hills with just a touch of biological shapeliness. They teeter and totter like discarded children's toys but give the impression of something scattered along a quiet landscape. This is a 6 x 8 painting. I used to do much larger "alien landscape" paintings -- that was probably most of what I painted in the '90s, come to think of it. 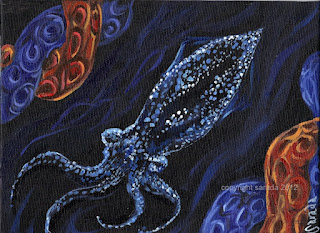 "Night of the Firefly Squid" is another 6 x 8 that I had to sit down and paint immediately after seeing some pictures of the little bioluminescent critters recently. Glow in the dark animals (and plants, and rocks, and anything) have always been close to my heart since a childhood spend watching and catching fireflies. There is nothing quite as amazing as the variety of life in the ocean, and these bizarre alien lifeforms truly seem to come from another universe. I can't do anything but marvel at them. I realize that it all serves a purpose -- attracting food or as part of a mating ritual -- but it's a lot better than anything humans have come up with. 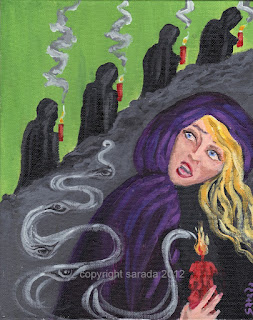 Finally in this week's grouping, "The Dark Procession" is another painting (8 x 10 this time) born of my omnipresent interest in pulp horror -- whether it's the covers of magazines like Weird Tales, or B-movie posters, I love the garish colors, and the grimaces of horror. I recently read "Phantom Perfumes," the Ash-Tree Press collection of stories from the Ghost Stories magazines of 1926-1930, which has a lot of covers of things like this.

It all links back to the gothic novels of the late 1700s through the early 1800s that I love so much. This painting is inspired in equal parts by books like Matthew Lewis' "The Monk," Ann Radcliffe's "The Italian; or the Confessional of the Black Penitents," and by Weird Tales style magazine covers; as well as my beloved 1960s and 1970s movie posters and images. Any time I put in a movie and it starts with a bunch of guys in hooded robes or capes carrying torches, candles or lanterns, I'm pretty much there.

So that's where I've been lately. Alien worlds, the deep ocean and gothic castles, as usual. Still working on some other topics too, some outer space, a couple of witchy storybook repaints, and perhaps some more nature-inspired art.

I also have six new 8 x 10 prints to list very soon, made from previously sold paintings or things I kept in my personal collection.
Posted by artbysarada at 1:41 PM No comments: 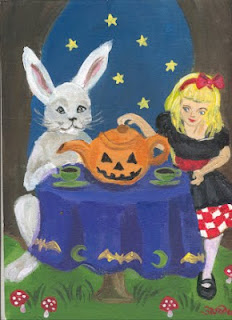 "Alice's Tea Party"
I realized in looking through my listings that I don't have any art with bunnies in it for sale right now! Which is kind of insane, because they've always been a favorite topic for me to include in my paintings.

So I thought for Easter weekend I would include a little gallery here of some spring, Easter, egg and rabbit-themed art that I've done over the years. I seem to have a lot more cephalopods and badgers in recent years, but I still love bunnies, so I will look to maybe re-doing some of these or similar paintings in the future!

And yes, I think a jack o' lantern is appropriate even for the Easter time tea party you can see above in my favorite "tea party" painting!

As creatures of the moon, rabbits seem to go naturally with night themes, but also have a silence about them that adds a touch of serenity and surrealism to any piece of art. Although wild animals at heart they seem naturally domestic -- gentle, quiet, unobtrusive, in a strange place where they are at once symbolic of the wild natural world and the home hearth. Yet at the same time, isn't there something just terrifying about the Easter Bunny?

The images I've collected here were all painted before I had access to a scanner with a high enough resolution to make prints from the scans, and unfortunately they are all long since sold -- except "Rabbot" (the rabbit with rainbow wings) which I do have high resolution scans of, for print-making purposes.

I have some of these images in my little online art gallery, http://www.artbysarada.com, and as always I can repaint any image in any size, with any variations -- I would love to do some more colorful spring and summer art, when I'm not busy with my gothic castles!

And yes these are all copyright Sarada, etc., so please do not use the images without permission. :) 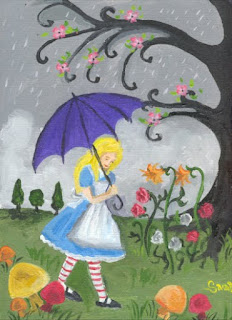 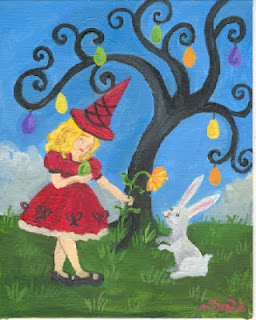 The title for this one is lost to time but let's call it "Easter Egg Tree" for now! 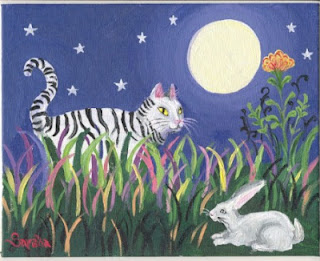 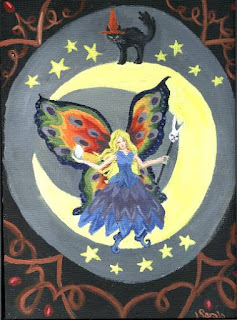 And a third without a surviving title, that I may have just called "Easter Fairy" at the time. 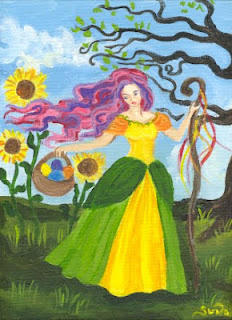 Ah one more without a title! "Mistress of Spring" sounds good! 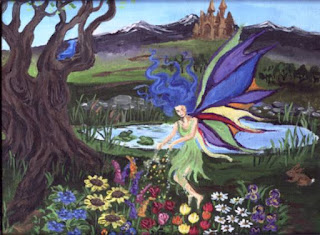 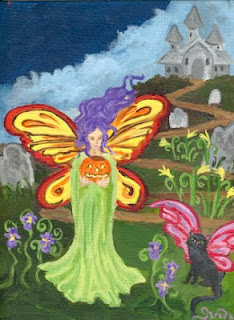 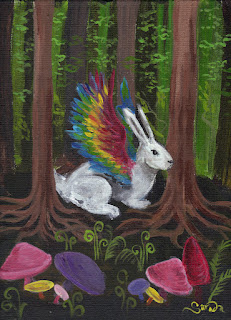 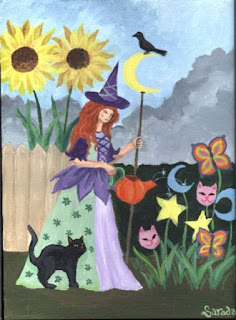 "Summer Garden"
Posted by artbysarada at 8:34 PM No comments: