I'm running pretty late on blog posts right now but I just have to get this in before Record Store Day, because it's kind of the most exciting thing that I have ever done, art-wise!

Last year I was asked by a good friend if I would be willing to do some special album cover art. Not just ordinary everyday special, but artwork for what happens to be my very favorite band, for the past 25+ years: the Legendary Pink Dots. Being asked to do some album cover art for your favorite band is kind of like...well, there's nothing else quite like it. When you've spent a certain number of years of your life writing your favorite band names on high school and college notebooks (or even on steno pads in township committee meetings if life has taken you in that direction), the opportunity to do this for the actual band is pretty amazing.

So, the details are: this is an unofficial Record Store Day release, and the inaugural release of the label Noise Noise Noise, based in California. It will be available in select independent record stores around the country, as well as at the store where the label-owners are based - Factory Records, 440 E. 17th St., Cosa Mesa, Calif. I've never been to the store in person because I haven't been in California in about 20 years, but they will definitely have copies there! They will also have them out where I am, at Vinal Edge in Houston (239 W. 19th St.) and I believe they will be at Sound Exchange in Houston as well (1846 Richmond Ave.). And many other locations around the country, so if you are interested in the LPDs, be sure to check the coolest, most independent stores that you know. :)

While you're at it, read the story of my friends' amazing label, store, and love in this OC Weekly article. It made me cry!! And it's a solid piece of journalism. :D

So, here is the description of the EP from the label itself:
LEGENDARY PINK DOTS - A SCENTED CANDLE E.P.:
All new material from neo-psychedelic musical experimenters Legendary Pink Dots. Three brooding, emotional, quiet, and lovely tracks from this beloved underground Anglo-Dutch experimental rock band! 500 copies pressed: 400 for Record Store Day release, 100 for the band's upcoming tour.

And here is the front cover! 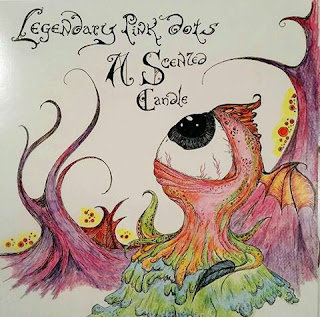 There is also a totally different back cover which I will post pics of when I receive my copy. It has the same hand-lettered, notebook-drawing kind of look to it. It was done in pen and colored pencil on Bristol board and based on some notebook doodles that I started last autumn.

I've never been in a record pressing plant, but it's one of those things I'd really love to do some day. My friends at the label took some pictures while this record was being pressed, so I am sharing those with their permission: 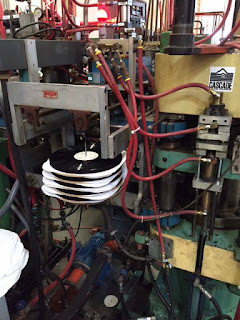 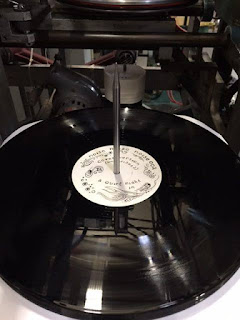 So here is another look at the cover, with some back covers scattered behind it (you can just get a glimpse of it here)... 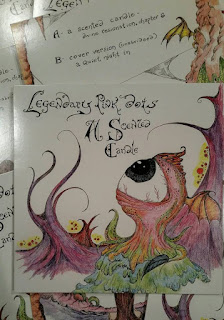 And below, the inserts... 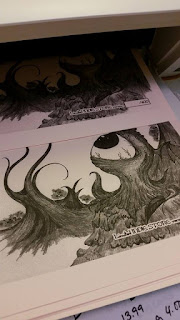 And here they are all ready to be put together and shipped out. 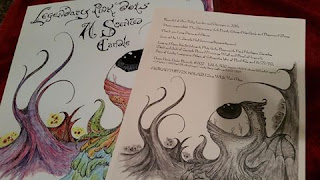 So if you're a Pink Dots fan, I hope you are able to snag a copy! A million thanks to Dave and Lisa, the folks behind the Noise Noise Noise label, for inviting me to be a part of this, and to the Legendary Pink Dots and Edward Ka-Spel, for allowing my artwork to be associated with their immortal music. It means more to me than words can describe, and I don't think it's ever going to fully set in that I was able to participate in this way. It's the kind of thing you want to go back in time and tell your 17-year-old self!

And whatever your musical tastes are, go out and buy some records on Saturday. :) Support independent music and independent record stores, and keep making and listening to amazing sounds.
Posted by artbysarada at 10:17 PM 1 comment: