Rabbits I have known I realized recently when my friend who maintains the blog Painted Lady Fingers got a little pet bunny, that I haven't painted rabbits in a long time.  I used to do quite a few paintings with rabbits in them though they were usually focused around spring time, as I posted earlier this year at Easter time.

Most of us have a lot of bunnies in life early on if we ever came across Peter Rabbit, Brer Rabbit, Winnie the Pooh, the Velveteen Rabbit, uh...the Trix Bunny...it goes on and on!  But they also have been wonderful silent mysterious moon creatures to me, inspiring things like Kenneth Anger's Rabbit Moon:

Or haunted the book that delighted my childhood with the promise of gold and jeweled riches, "Masquerade" by Kit Williams (I still have positively no idea how anyone ever solved that puzzle). (...and here is a nice blog post about rabbits, below, I found in my search for an image for that book). 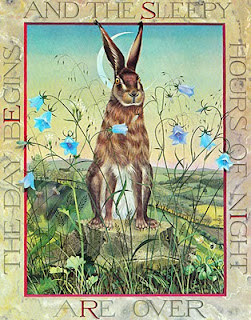 Or, perhaps most significantly, in "Watership Down" by Richard Adams, the unforgettable novel that introduced us to Fiver, Hazel and the other rabbits who spoke their own language (yes, I memorized snippets of it in sixth grade) and had epic struggles and battles in the English countryside. This book was so emotional for me around the age of 10-14 that although I read it at least three times then, I haven't been able to go back and read it again because I know I'd cry too much.  The same thing happened with the Duncton Woods books about moles.  I drew pictures of each of the rabbits for a little project in school around sixth grade, but of course they all pretty much looked the same...still, I think that is where my basic idea of how to draw a rabbit came about. 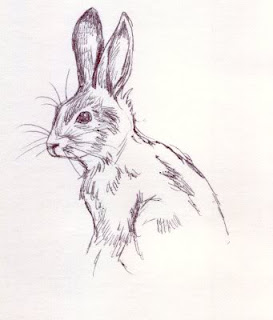 So in realized that I have been gravely short on rabbits in my art lately, I'm going to start trying to incorporate more of them, as evidenced by my little Halloween rabbit painting up above, "Carrot Cottage."  Some will be naturalistic like thee little bunny you see above and some will be anthropomorphic and cartoonish but I will try to include them more often than Easter time as I remember how important they have been to me throughout my life.

I've been excited about the LHC (Large Hadron collider) for years, as an armchair physics nerd (i.e. I like to read the wild and crazy stuff but I wouldn't know what to do with an actual formula) so I was beside myself with joy when I heard the announcement yesterday that they are pretty darn sure that they can confirm the discovery of the Higgs boson.  Now, rather than have me explain what this is if you're not familiar, let me just recommend you to this video to do the hard stuff.  Got it? Okay!  So basically this opens up a whole new world for physicists in understanding the universe.  The fact that they built this enormous $10 billion 17-mile-long machine to discovery something that is invisible and undetectable by any other means, is pretty amazing, and to have it basically confirmed, is tremendous.  And it's wonderful to think that its namesake, Dr. Peter Higgs, is still alive to see all of this happen.

Several years ago when they were getting ready to start the experiment I did this little drawing to illustrate my enthusiasm: 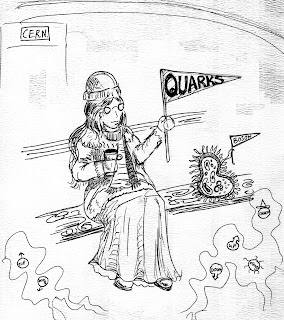 I also did some sciencey art, such is this concept of a hydrogen atom (the deuterium isotope, with one proton and one neutron) -- the human-like figures represent quarks.  I made prints of this available on Etsy today: 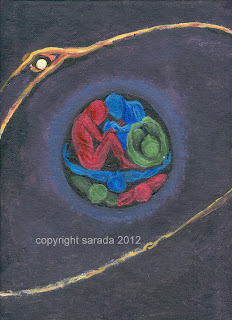 I'm not the only one excited though, a perfume company I enjoy, ZOMG Smells, which has a lot of science and nerd-inspired scents, also made their Higgs Boson scent a permanent part of their catalog yesterday. I have two bottles of it and it is one of my favorite scents ever!!!  Dark, deep rich tea and smooth, glossy woods.  It's a masculine fragrance by most standards but it's totally me and I highly recommend it and their other fragrances!

I'm reading a book by physicist Dr. Lisa Randall to continue my little personal celebration, since it was her book "Warped Passages" that got me interested in all of this in a big way a few years ago.  I want to make sure I don't forget all this complicated stuff so I want to refresh myself on it a little bit.  It's not exactly information I need in day to day life, but more information and knowledge is not a bad thing!
Posted by artbysarada at 10:15 PM No comments:

It's been almost three months since my last update since things have been very busy and most of the creative work I've been doing has been for personal use, but I have a lot of things brewing so it's time to say hello to the outside world again!

I am working on a wildlife painting for a fundraiser for the Houston Zoo this fall and I am in the process of finishing that, plus I will have some paintings in the art portion of the Dead Audio Music Festival. More on that as it develops!  In the meantime here is a new painting with a bit of Halloween in the air, because the Fourth of July is generally around when I start looking at my Halloween stuff and trying to figure out how to add to it for the autumn season.  I mean, I do that all year....but it becomes especially important around now. :) It's been so long since I posted that Blogger has changed its layout a little so in case I didn't link that properly, you can see this item listed on my Etsy shop.

More soon...as in, tomorrow, most likely, as I have some things to say about my excitement over the Higgs Boson!!

Posted by artbysarada at 7:26 PM No comments: