Haunted carnivals in the fog

Sometimes an image will linger with you for a while, and quietly percolate in the back of your mind as it shapes itself. About a year ago, a carnival was set up down the road in a bank parking lot. At this time of year, February/March, there tends to be a lot of fog at night, as the temperatures and humidity struggle to sort out the seasons, and what may seem like a nice evening for a stroll can quickly turn into one sliced through by biting wind, or muffled by thickening mist.

It goes without saying that a late night drive in the fog has an otherworldly, ethereal atmosphere. If you've watched enough horror movies it may seem as though a shambling figure might burst through the shifting mists, arms outstretched, clothed in shredded garments from the grave. Add an empty carnival in a parking lot and you begin to feel a little post-apocalyptic.

This isn't a tutorial but I wanted to show how experiences and viewing other works of art can act as inspiration, over time, as I started a foggy painting back on that night over a year ago but I never filled it in until recently. 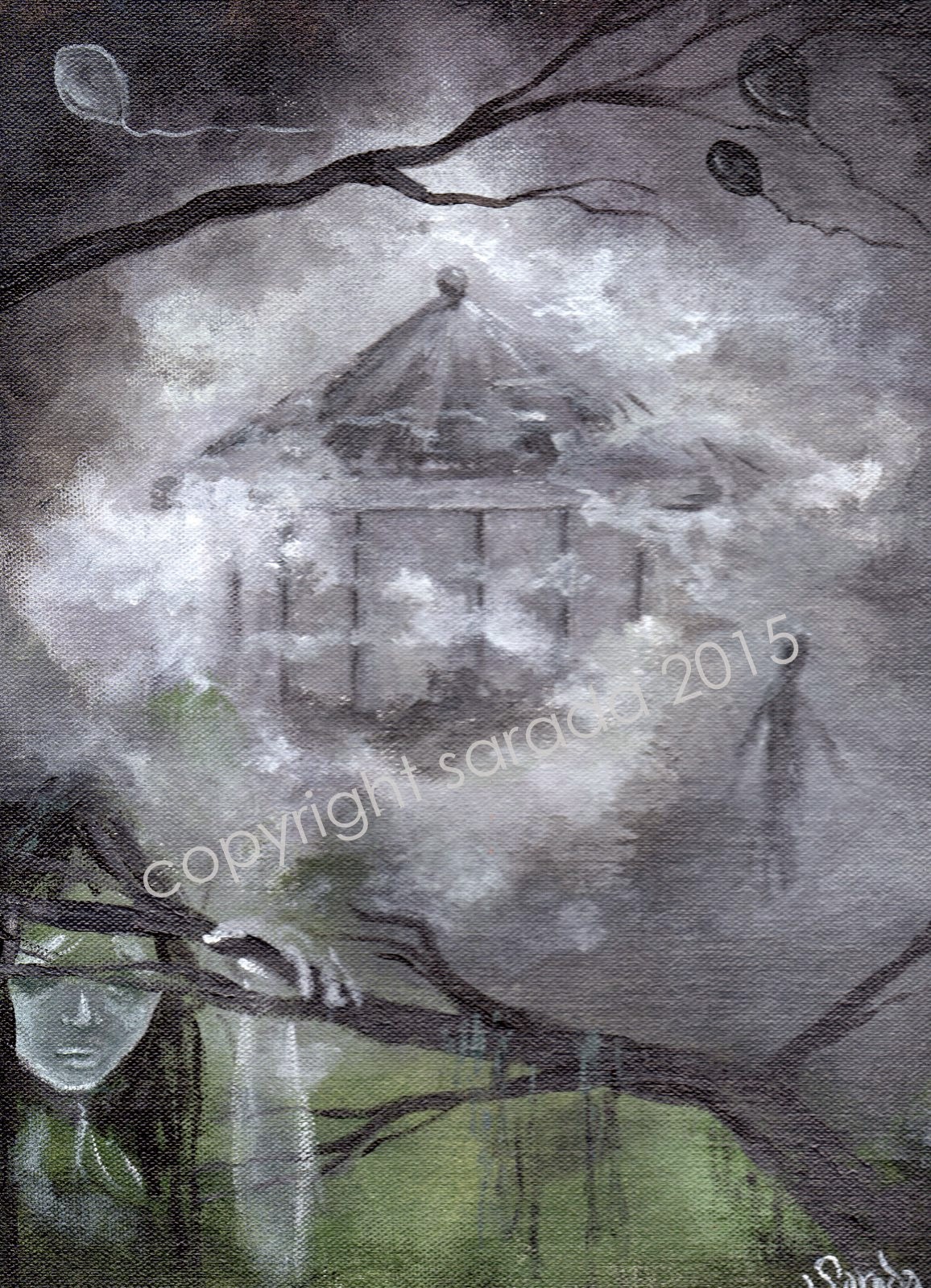 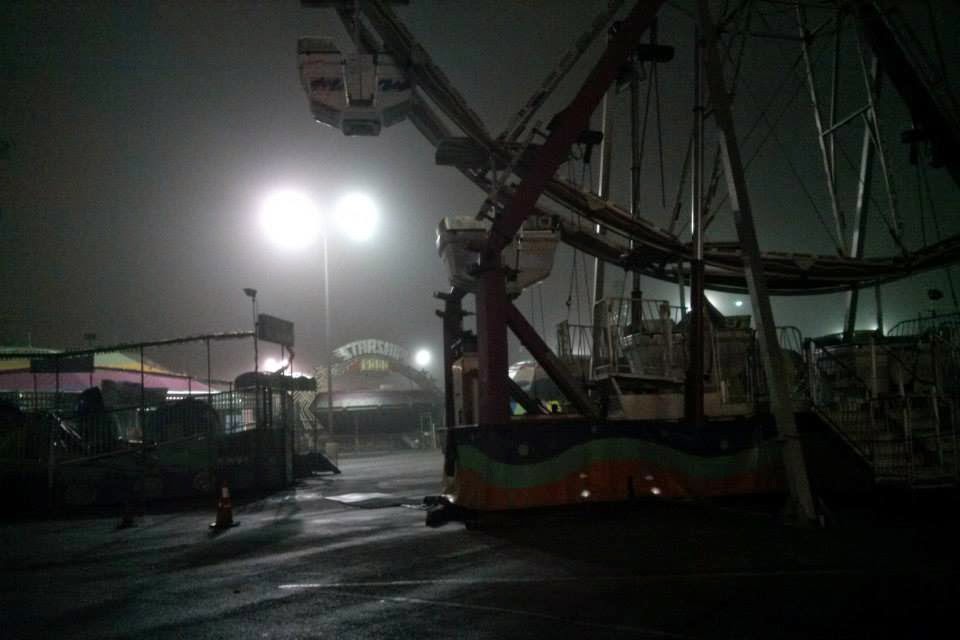 There is something unspeakably haunting about an empty carnival at night. Countless horror films, and a few video games (I'm thinking of Silent Hill 3, since I haven't played any new games in the last 10 years) use this as a stage for creeping, lurking characters and creatures to stagger and slink from out of the fog. 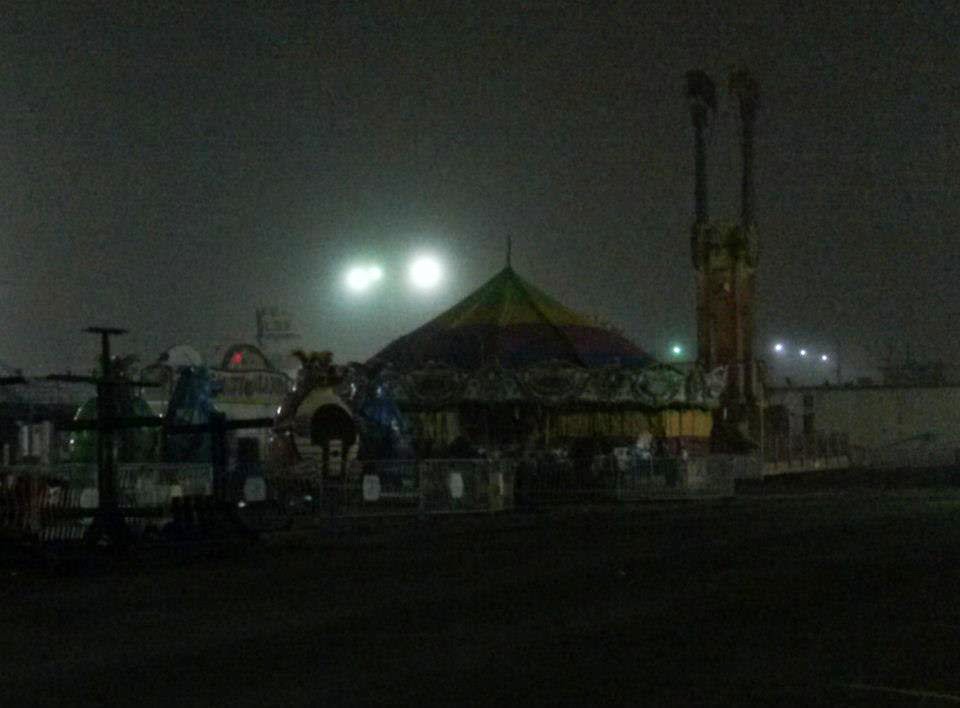 You can tell that the colors are bright and festive, but they are muted and dampened by the darkness and oppressive, damp mist. Even the streetlights are diffused and distant, hovering like landing UFOs in the background. The machines of amusement are poised robot-like, painted clown colors and raised in threatening positions around the perimeter. 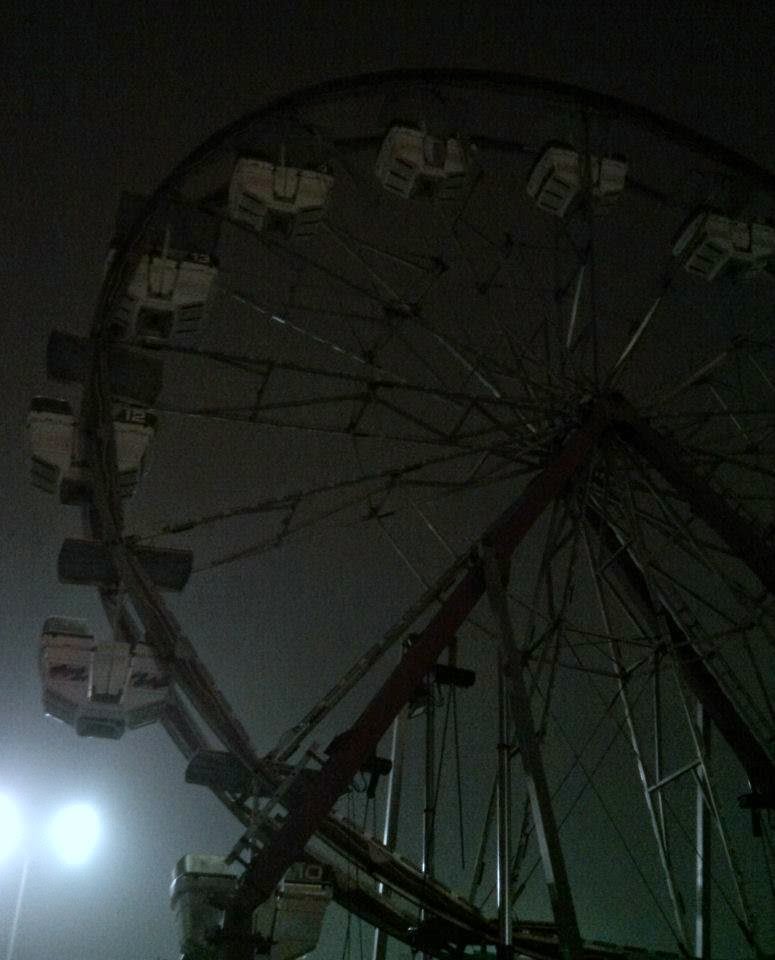 A ferris wheel could almost be a torture device, against this misty monotone, creaking in the dampness, swaying uncomfortably. 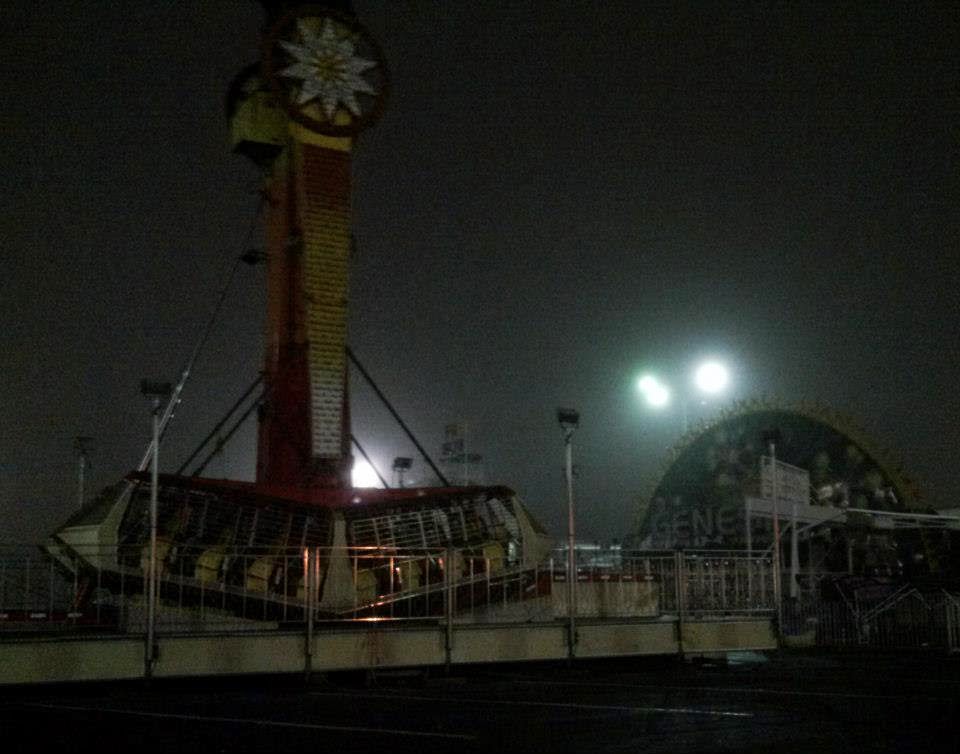 A pendulum cage hangs still and silent, painted with gaudy colors, waiting for daylight to bring it back to life.

In other words, it all puts me in the mood of a film like 1962's "Carnival of Souls," which speaks to this same surreal, nightmarish mindset, and captures a solitary, drifting journey through the horrific wonders of the abandoned pavilion. 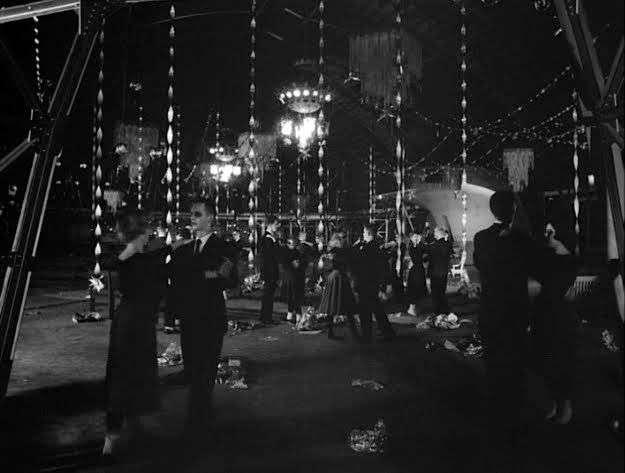 That feeling of being lost, alone, disoriented, and in a dream state, is one that no romantic-minded person can resist when coming across a bleak, abandoned landscape. 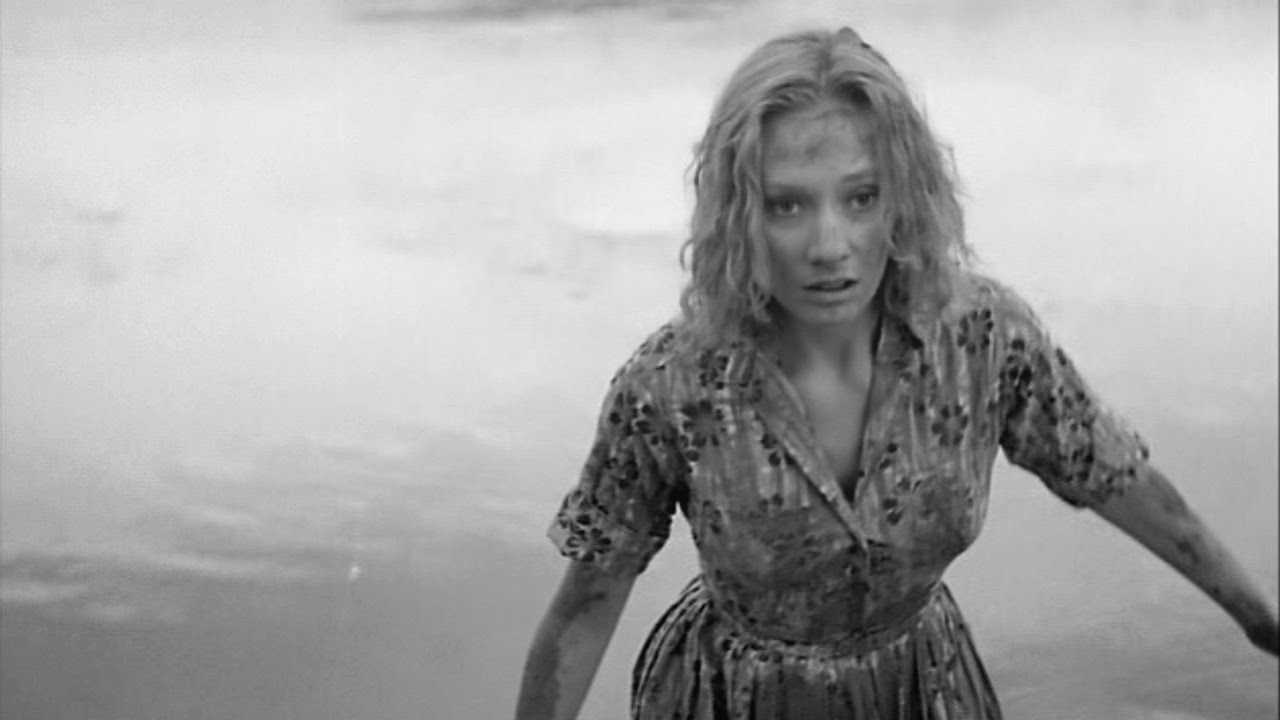 In filling out my own thoughts and impressions, reflecting on my favorite scenes of abandoned amusement and surreality, images like these flashed through my mind, of lost and haggard figures, stumbling, emerging from swamps and lakes, hung with seaweed, moss or the clothes they were buried in. 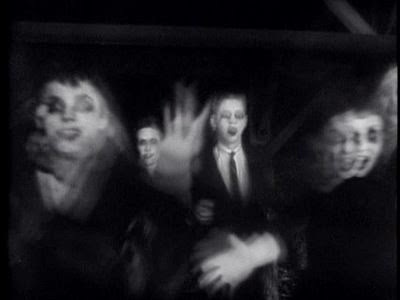 Sometimes the threat is palpable, and discernible... 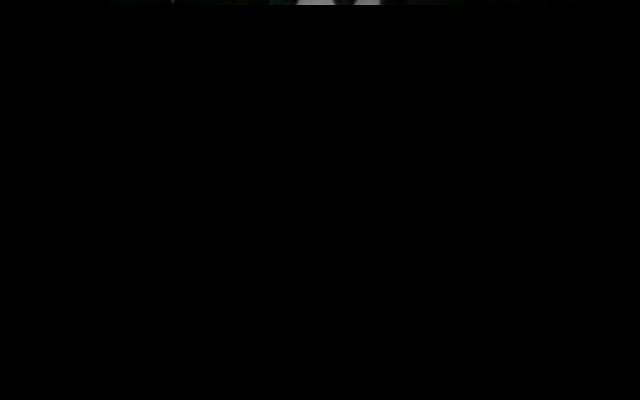 Sometimes a shadowy figure merely lurks in the doorway or at the edge of vision, and you can't be sure if it is friend, foe or a reflection.

I think I had my carousel in the fog looking at me for months as I wondered what to place around it. I thought about the photographs of abandoned amusement parks around the world, that I've come across online over the years, such as this one in Pripyat, Ukraine, that has been well-documented: 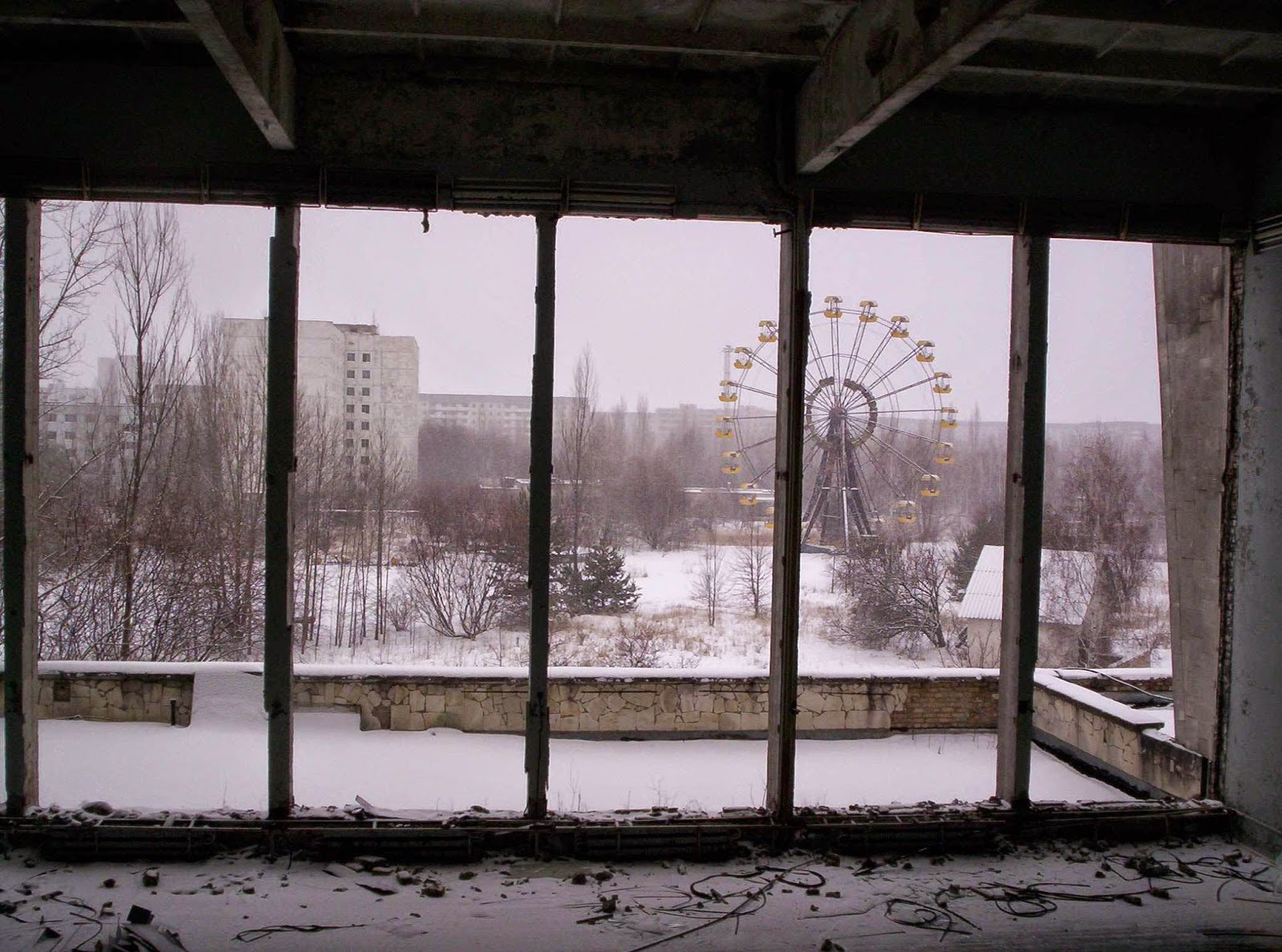 While images of shattered carousel horses, grimacing clown faces, broken bumper cars and forgotten snack stands, festooned with popcorn garlands and tiny colorful flags and lights, were all appealing features to consider, at the end I just wanted a few balloons, and a couple of ambiguous figures. Like the shadows I see outside at night, moving around in the March fog, they could simply be fellow wanderers, or perhaps they are something much worse.
I hope your own experiences and viewing habits help to inform your personal expression and creativity, as we look around and within for inspiration in all manner of places, but strange and familiar.

Posted by artbysarada at 3:10 PM No comments: