Ladies and gentlemen, the Poe toaster 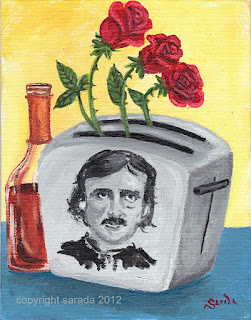 Yesterday (Jan. 19) was Edgar Allan Poe's birthday and I noticed in the news that the legendary "Poe toaster" did not make an appearance in Baltimore. For decades, a mysterious figure has placed three roses on Poe's grave, made a toast and left a half empty bottle of cognac at the site on the great writer's birthday. This is the third year, according to news reports, that he did not show up. Perhaps it was because it was only meant to continue until Poe's 200th birthday (which was in 2009). The world may never know.

A lifelong fan of Poe myself, I can remember taking down our very, very old copies of his complete works from a shelf almost too high to reach, as a little girl, and reading "The Pit and the Pendulum." I don't know why, but that story really appealed to me. Maybe it was all those Saturday afternoons watching Hammer horror films and Vincent Price movies on Channel 48 with my dad, but I'm sure that we saw quite a few Poe adaptions over the years. At any rate, I always wind up going back to him, and there's nothing better than reading Poe on a dark and rainy night when the lights go out.

And as a general fan of mysterious figures and cemeteries, I am sorry to hear that there may not be any more Poe toasts of that nature. I painted my little tribute, above, to the humorous double meaning of the name, but it's meant with great love. I hear "Poe toaster" and, well, that's the first image that comes to mind (maybe it's since I don't drink, but love breakfast foods). I added in the three roses and half-empty bottle as a nod to the real toaster.

And really, wouldn't you want great horror writers' images on all of your kitchen appliances? A big nod to one of my friends who suggested a "Bram Stoker's spatula" or a "chopping Bloch" to continue that idea, though I haven't done any paintings in that vein yet. :)
Posted by artbysarada at 7:51 PM 3 comments: 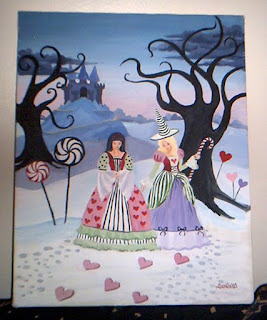 About 10 years ago, maybe nine, I did the painting above on 16 x 20 stretched canvas -- the photo above is not high res but you can tell what it looked like though the colors are muted because of the lighting. I really love that "winter sky" palette -- the pinkish cold tint as the sun sets, and all of the pastel ice cream shades that I associate with it. As much as I love dark and gothic colors, I also like these shades. And for some reason I really, really love "Candyland" images of heart and stripes all among the snow. So, whatever your thoughts are about Valentine's Day, that whole set of images really appeals to me.

And most of all it's an excuse to paint fancy dresses! My witch paintings are always little fantasies of dresses I want to wear. And yes I do wind up making a lot of dresses like that. Stripes and hearts -- and bustles, and bodices, oh my! I haven't made any like that in awhile since my size has been fluctuating the past couple of years but I will always have a strong longing to wear bustles, petticoats and bell sleeves.

For instance, this Simplicity Pattern for Alice in Wonderland and the Queen of Hearts really embodies what I want out of a dress! I have this pattern, so we'll see what happens.

Since I wanted to recapture this image now that I can get a high-res scan of it, I did a 9 x 12 version of the same approximate image. Now you can see how bold and bright the colors should be, though I had to cluster the main parts of the image in the middle. I also wanted to be able to make prints of the image so I wanted something easier to make into an 8 x 10.

This painting is available on Etsy right now. 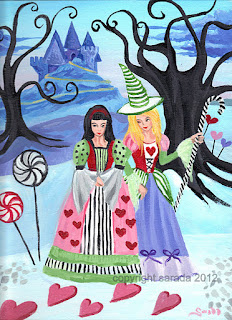 The snowy season won't be around long though (and admittedly I am writing from a place where it was 73 degrees and I was out in short sleeves today) so my tube of white paint will get a break soon. Even though I was in no danger of seeing "the white stuff" this winter I can enjoy its aesthetic a lot more when I don't have to shovel it. But bare trees and blankets of white on the forest floor will always be beautiful!
Posted by artbysarada at 11:26 PM 4 comments:

Maybe it's my proximity to the fantastic Menil Collection lately, a museum in Houston with a fantastic surrealism room, but I've been in a very surreal mood so far this year. It's really my favorite art movement -- that and the Symbolists, and the Pre-Raphaelites, but it's the one that I think stretches the furthest back and the deepest for me.

And on the other hand, I watched Yellow Submarine the other day, a lifetime favorite, but which I haven't seen in awhile. Stir in a healthy helping of going through a Bonzo Dog Doo-dah Band phase this week and you've got an interesting cocktail of images and ideas and weirdness to be swirling around right now. 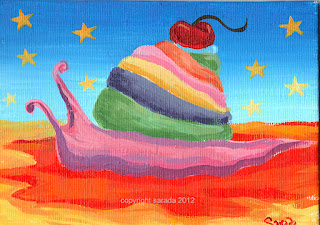 So with that, I give you some recent paintings. "Lucy the Snail in Dessertland", above, was inspired by a little character that I saw several times in the background in Yellow Submarine, which was a snail with a colorful shell -- but I mistook the shell for a cupcake! I thought that was a nice idea though so I gave this snail a cupcake shell back.

I thought I'd take that idea a step further and make another mollusc into a dessert treat. I admit this is a little odd. I took what I think is an auger sea shell, the long pointy ones that look a bit like an ice cream cone, and made it into an ice cream cone animal underwater. 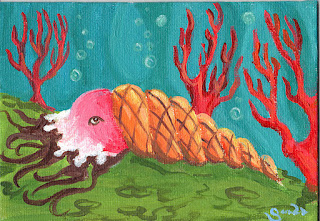 01.16 - edited to add one more painting, I might put him in a separate post too but I did him last night after completing this entry. It was kind of impossible to resist once I started doing molluscs with desserts. This one doesn't have a dessert as part of his structure though, he's just carrying the ice cream around, but I had to do it once the idea occurred to me! 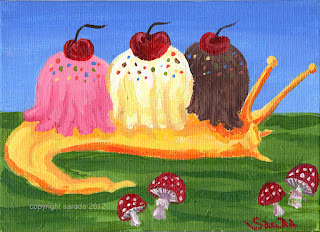 On an unrelated note, I also completed a painting I've been wanting to do for awhile. My ghost bottles print has an extremely well-viewed and liked item and I took the idea of ghosts in bottles and transported them into lava lamps for this piece, "Spectrum of Psychedelic Spectres." The original ix 6 x 12 inches but I also made a print that is 8 x 10 inches on photo paper, and it has a wide border at the top and bottom to make up for the strange size. 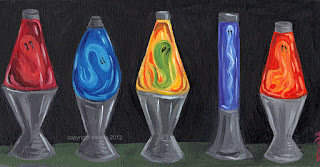 Here is the painting (above)... 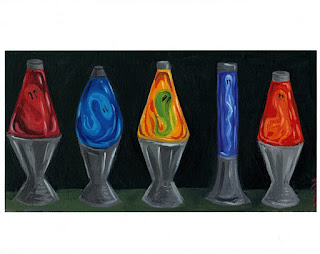 And here (again, above) is the print.


Some of the other things I've been messing around with are the surreal alien landscape paintings I did about three years ago (in January) and working on presenting them as prints. I don't think I ever gave this piece below a more complicated name than "Alien Moon" but it's one of my favorites. I kept the original but I have prints of this now available. 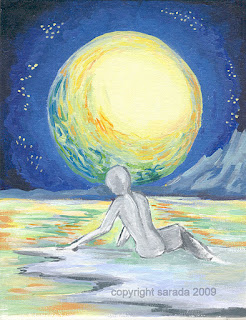 And finally, on the psychedelic theme, I uncovered this painting I did in 2010 and decided to bring it out to share, with some of the flora and fauna of the warmer climate that I am currently enjoying, with flowers known as firewheels (or Indian blanket flower) and passion flowers, as well as my little friends the lizards. I wound up calling it "Sunset in the Magic Garden" (below): 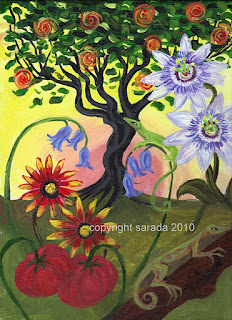 I am working on something for Valentine's Day right now and a few other odds and ends I need to scan or write up a little something about but it's a busy time for art right now -- and enjoying the nice weather and lack of snow, and later sunsets!
Posted by artbysarada at 2:57 PM 4 comments:

Fundraising for a friend 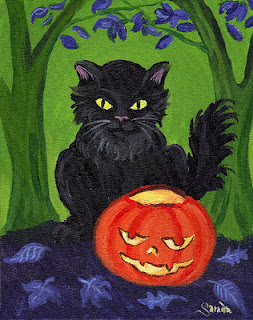 A friend of mine is facing some expensive veterinary surgery for her beautiful black cat, and I thought I'd chip in by donating all proceeds (before shipping cost) from the sale of prints of my black cat painting "Guardian of Pumpkin Woods." I also sold the original and have donated the proceeds from that painting. The prints are 5 x 7 and are $8 each, plus $2 shipping in the US or $4 shipping elsewhere. I have some in stock right now and can ship next business day after purchase - I will continue to donate proceeds from this print to her fund as long as there is a need.

The original was inspired by my own black cat, Voudoun, and I have two more black cats in my life as well, so they are pretty near and dear to my heart, as are all cats! My white cat Shizuka is the love of my life as well, even though she gets fur all over all my black clothing. :)

I have a few other 5 x 7 prints back in stock too, and most of my prints can be custom ordered in other sizes depending on the size of the original (if the original was 5 x 7 for instance, a print that is 8 x 10 will look like it's been blown up too large, so check individual listings).
Posted by artbysarada at 7:30 PM No comments:

New art for the new year! 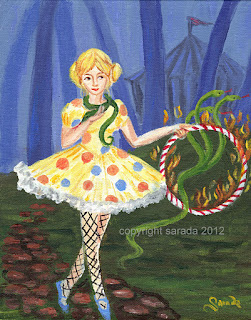 I didn't manage to get one of those "end of year" things going this year but I do have a "first of the new year" to share -- immersed as I am in surreal and psychedelic things lately I feel like doing some circus inspired art despite the fact that I have never been to a circus or particularly interested in them. But the images are stuck in my brain, so what can I do but obey! This is "Hydrangea" so-named because her three-headed snake is something like a hydra...and I like hydrangeas, the flowers. She seems very pretty, innocent and flower-like.

I don't think I've done a lot along these lines in the past (circus themes) -- here is the most prominent, "Night Circus in the Pine Barrens," still available on etsy: 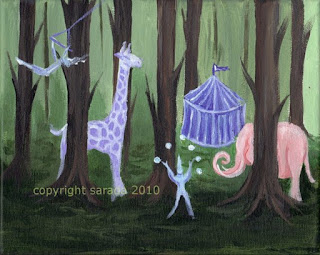 I have several two-headed woman paintings that I will have to repaint in order to offer them as prints (the originals were done and sold before I had access to high-resolution scanning that would allow for print-making): 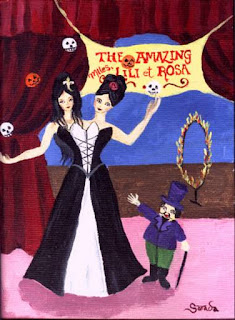 'Lili et Rosa" was something I painted about 10 years ago, maybe 9...I think I would definitely like to do a new version of this so I can offer her as a print. 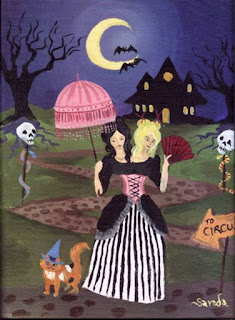 And continuing that theme, another painting which I unfortunately didn't record the name for so I will have to come up with a new one!


Finally, one that I do have a print available for, since I think she has kind of circus or carnival atmosphere to her... 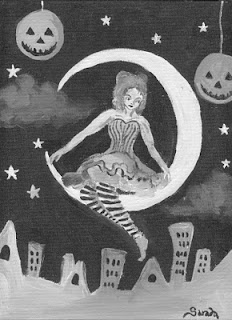 So that's where things are at right now. I'm watching a lot of colorful arty movies and reading some surrealist books so that should be fueling some more things in the months to come...and I am in no danger of seeing any snow right now so I guess I am well out of the winter art mindset already!
Posted by artbysarada at 9:47 PM 4 comments: